14 April is World Chagas Disease Day, one of the WHO global health days. Chagas disease also known as American trypanosomiasis is a vector-borne tropical disease caused by Trypanosoma cruzi, a protozoan parasite. T. cruzi is mainly transmitted via kissing bugs. Worldwide about 6–7 million people are currently infected with T. cruzi and most of them are living in Central and South America. The disease is curable, when detected early but can be life threatening if it remains undetected. As a lot of people are not aware of their infection, testing is crucial to fight Chagas disease.

With the RealStar® Chagas PCR Kit 1.0, altona Diagnostics provides an in vitro diagnostic test for the qualitative detection of Trypanosoma cruzi specific DNA. 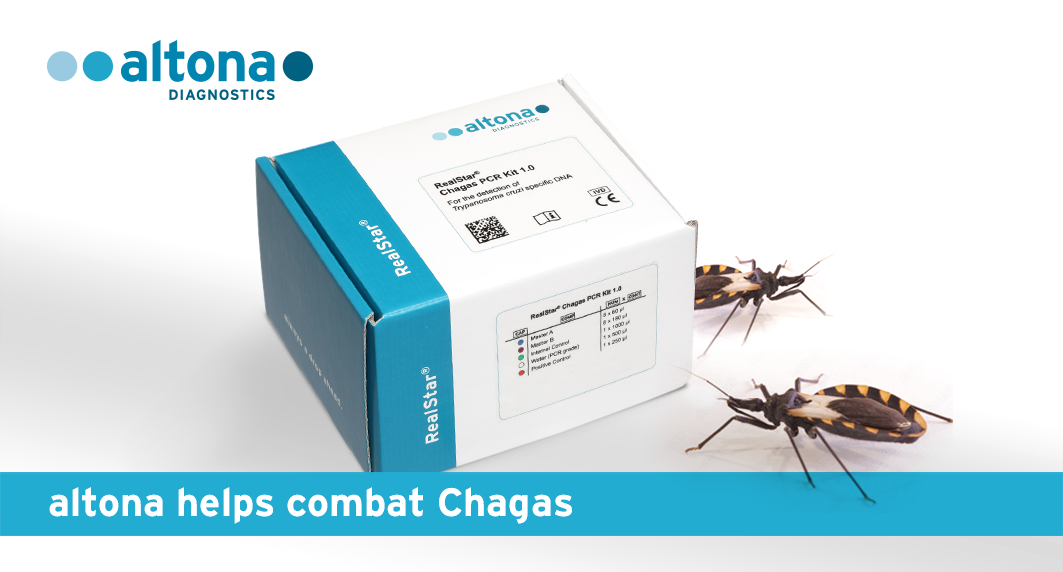 Chagas disease is named after the Brazilian physician Carlos Chagas who diagnosed the first case of the disease in 1909. Chagas was able to prove that the disease was caused by T. cruzi and found out that blood-sucking triatomine bugs, or kissing bugs, serve as a vector for this parasite. T. cruzi is mainly transmitted to humans via feces or urine of the bugs that are smeared into the bite wound, eyes, or mouth. Moreover, infections can occur by the consumption of food that is contaminated with feces from infected bugs. Additionally, the parasite can be transmitted via blood transfusion from an infected donor and congenital (from a pregnant woman to her baby).

There is an acute and a chronic phase for Chagas disease. During the initial acute phase, which lasts for about two months, a person may have no or only mild symptoms. These can include fever, fatigue, body aches, headache, rash, loss of appetite, diarrhea, and vomiting. The disease can be cured very effectively with medication if the treatment starts early after the infection. As the symptoms are mild and unspecify, the disease is often undetected. Therefore, Chagas is often referred to as a silent disease. If untreated, the parasite can remain in the body for years leading to a chronic disease. A chronic Chagas disease can cause cardiac and gastrointestinal complications which can be life threatening. Globally, Chagas disease causes approximately 10,000 deaths per year.

The prevalence of Chagas disease is often high in regions with poor living conditions. In these areas, vector control can help to reduce the cases of Chagas. Due to urbanization and migration the disease is also present in urban arrays. Testing of the population is crucial, for an early diagnosis and a successful treatment. Moreover, to stop the spread of the disease it is important to stop the transmission via blood products and (for expecting mothers) prevent congenital infections. For example, in Argentina about 1300 newborns are infected per year but only half of them reaches an accurate diagnosis. Therefore, screening of pregnant woman and their newborns is crucial to fight Chagas disease and initiate an early treatment. Moreover, screening of blood products stops the transmission from infected blood donors.

Get in touch with our Latin American Sales Representatives.

Find out more about the RealStar® Chagas PCR Kit 1.0.

Find out more about Chagas Disease Day on the WHO website.